I am trained as a classical violinist, and a self-taught composer. I hold a Bachelor of Music Performance with first class Honours from the Sydney Conservatorium of Music. Unfortunately I developed focal dystonia in my left hand towards the end of my degree. In 2015, I enrolled in a Bachelor of Science at the University of Sydney, majoring in mathematics. I graduated with first class Honours in Pure Mathematics in 2018, and I am currently a Masters research student and tutor at the University of Sydney.

Click here to read my series of blogposts on focal dystonia.

Continue reading below to see my ‘official’ biography.

Jonathan Mui was born in Hong Kong in 1991 and started playing the violin at the age of five. He has studied with internationally renowned teachers such as Shi-xiang (Peter) Zhang, Charmian Gadd, and Ole Bøhn. Jonathan holds a Bachelor of Music with first class honours from the Sydney Conservatorium. During his studies, he served many times as concertmaster of the Conservatorium Chamber and Symphony orchestras. As a recitalist and chamber musician, he has performed with such artists as Einar Steen-Nøkleberg, Geir Henning Braaten, Daniel Herscovitch, and David Fulmer.

Jonathan was the first prize winner at the 2006 Ku-Ring-Gai concerto competition (NSW) and the 2007 National Youth Concerto competition (Queensland). In 2007 he also received first prize along with the Timberlay Travel Scholarship at the Kendall National Violin Competition, and in December 2010 he won the Gisborne International Music Competition (NZ). He was invited back to New Zealand in January 2011 to perform at the Australian High Commission in Wellington. Jonathan participated in the Lausanne Summer University chamber music seminars in 2011, and gave solo and chamber music concerts in Oslo at the Vigeland Museum concert series in 2011, 2012 and 2013. He has also performed in Brazil: at the Teatro Municipal in Rio de Janeiro in 2011, and later at the Santa Catarina Music Festival in 2014. In 2012 he was also invited to participate at the Carl Nielsen International Competition in Odense, Denmark.

Jonathan toured internationally as a member of the Australian Youth Orchestra (AYO) in 2013, performing under the baton of Christoph Eschenbach and with soloist Joshua Bell in such venues as the Sydney Opera House, Concertgebouw Amsterdam, Berlin Konzerthaus and the Menuhin Festival in Gstaad. As part of AYO Chamber Players, Jonathan also performed at the Musica Viva Festival in Sydney in 2013, and received chamber music coaching from Lambert Orkis.

With the onset of focal dystonia in late 2013, Jonathan has unfortunately needed to withdraw from performance. In March 2015, Jonathan conducted a program of his own arrangements for a charity concert held at Sydney Town Hall for children with disabilities. In that year, he was also awarded the Watermark Composition Prize for his solo violin piece, Rhapsody No. 2, which is now a test piece for the Kendall National Violin Competition. In February 2017, pianist Nicholas Young gave the world premiere of his Three Concert Pieces for solo piano in the Utzon Room at the Sydney Opera House. In 2018, Jonathan completed a Bachelor of Science with First Class Honours from the School of Mathematics at the University of Sydney, where he is now a masters research student and tutor. 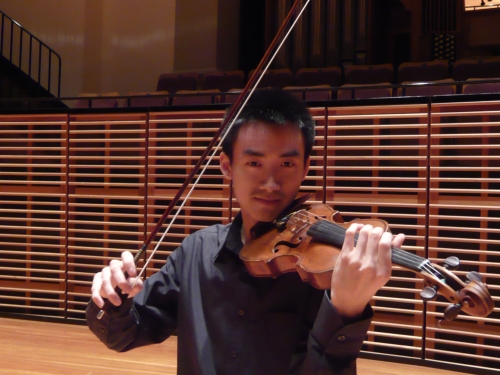 I write about violin playing, composing and arranging, and mathematics.